Hours away from death, an insulin injection saved Januka’s life 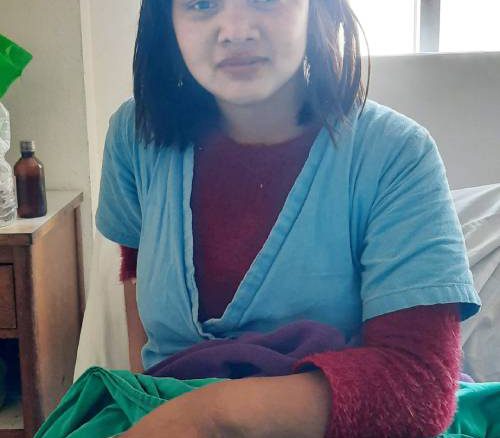 Hours away from death, an insulin injection saved Januka’s life.

Growing up in a broken family, 21-year old Januka was found on the side of the road, unconscious and only hours from dying.  Thankfully the police brought her to Scheer Memorial Adventist Hospital where she was discovered to have a blood glucose of 931 mg/dl, a level that literally is incompatible with life!

Januka’s father is an alcoholic with a mental health disorder. And, as is the sad story of many people in Nepal with no access to mental health treatment, he lives on the street.  Her mother, a subsistence farmer, who also has a mental health disorder, raised 4-children including Januka.  Traveling from a remote region of Nepal (Ramechappa) to Kathmandu, Januka was able to stay in a hostel and study until 8th grade.

Tragically, during an exam break, as she was traveling back to her home, she was raped by two men.  Thankfully the police were able to arrest these men – although, no one knows whether they were penalized for their crime!  Obviously traumatized from this terrible, life-altering attack, Januka never finished her education.  Living in her village, almost destitute, she was married to a son of a family with modest financial means.  At age 19, 1-year after being married, she conceived a baby boy.

She never told anyone about her type 1 diabetes mellitus, a diagnosis made at age 15.  When her husband, a truck driver, discovered her illness, he absconded, leaving her and their son.  Her in-laws kicked her out of their home, and she went to jump in a fast-flowing river. Thankfully villagers found her and saved her from her act of suicide.

Januka accepted her fate and decided to move to a new town. She found a job as a cook and cleaner in a small hotel.  Her employer gave her 3,000 rupees (approximately $30 USD) every month.  Januka split this money and gave half to her mother.  To obtain treatment for her type 1 diabetes she would travel many hours by bus to Patan Hospital to receive free medicines.

Despite her best efforts, a broken health system prevented her from receiving on-going care.  Insulin only costs around $10-$12 USD per month, but when she only makes this much in her job, how can she afford it?

A few weeks before her admission at SMAH, she had a similar episode where she fainted and was found by the police. During her admission to our Hospital, Mr. Rajesh Chand, SMAH social worker, worked tirelessly to trace Januka’s family and it was during his investigation when he discovered the safe house where she had previously stayed.

After 3-days of life-saving treatment in our ICU, Januka was transferred to the ward and stabilized for discharge back to the Safe House.  When she came she only had 250 rupees (approx. $2.50 USD) in her pocket.  SMAH provided 100% charity care to her, set her up with medicines, and a solid follow-up plan, and then discharged her back to the Safe House.  The Safe House staff are working on connecting her with an NGO who helps battered women and will be able to get her in to a skills training program so that she can learn basic income-generating skills.

Dr. Angela Basnet, Medical Director/Chief Medical Officer at SMAH, was the consultant Internal Medicine physician who cared for Januka during her admission.  She explains, “I feel so grateful we could help Januka during her greatest time of need. When she arrived in the hospital she was almost dead.  Through the treatment we provided she rapidly improved and we were able to safely discharge her to a community organization. It’s for this reason, I am thankful we could save Januka’s life.”