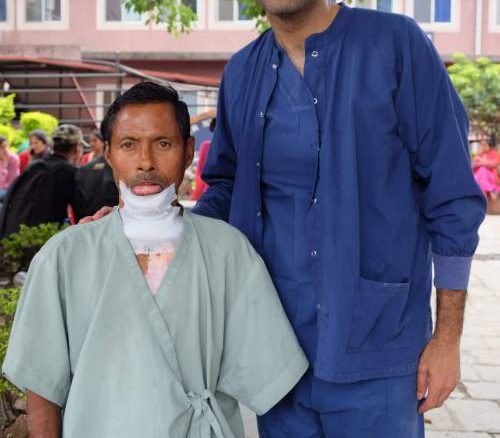 Ram Shankar felt himself tumbling forward towards the blazing logs, pushed by a force no one could see. Suddenly, he was on fire.

The fateful day started when he was walking to his daughter’s house, several hours away. It was cold and wet, rain was pouring from the sky. He and his wife, whom he married at age 17, were soaking wet. Out of desperation, they stopped and lit a fire. As the hours passed alcohol was steadily consumed and the darkness of the night was lessened by the dancing flames of a warm fire.

His burn was likely caused by him drifted off to sleep and falling forward into the fire in his intoxicated state. However, his culture’s unwavering belief in black magic made him believe his near fateful fall was from unseen forces pushing him from behind into the blazing flames.

Ram was taken to a local surgeon, who did his best to treat the burn with the limited resource available.  He was discharged to home after being provided basic wound care to burns across his hands, chest, neck, and across part of his face. His physical pain was immeasurable.

Ram’s village, in the far western Nepal region of Sudurpashchim Pradesh, is near Lucknow, India. In hopes of treatment, his oldest son traveled with him to India. After two weeks and more than US$6,000 in doctor’s bills—far more than a subsistence farmer with nominal education could afford—he returned to Nepal after minimal treatment and no improvement.

He stopped working. He never went anywhere as people avoided him because of his physical deformities. His cloths barely hung to his body as he had lost so much weight because he couldn’t eat due to the deforming facial burn contractures.  (A contracture is the tight band of tissue that forms over a burn if the wound is not appropriately treated.) His emotional pain was immeasurable, and he was severely depressed.

When he was all alone he would cry, thinking he had not fulfilled wishes God had for his life.  As far as he was concerned, God was punishing him. As his depression worsened, he contemplated and finally attempted suicide. His wife rescued him and pleaded with him to never attempt suicide again. She promised to kill herself if he killed himself. So, in a mutual pact, they agreed to never reattempt suicide.

Since the late 1980s the Sydney Adventist Sanitarium has brought burn teams to SMAH to treat patients like Ram. Now named Open Heart International, the multidisciplinary team of surgeons, anesthesiologists, nurses, and occupational therapist treat approximately 40 burn cases every year. The services they provide are phenomenal!

Two years ago, Dr. Shiv Chopra, a general surgeon originally from England, and a current third-year registrar in plastic surgery in Australia, traveled with the burn team to Scheer. He described his first trip as very eye-opening experience. “The cultural differences, systems, and the limited resources made for the phenomenal one-week surgical camp.” He loved the trip and wanted to return because he noted the significant difference the trip made in the lives of patients, and primarily the children. “You give people their lives back.”

Ram explained that he had given up any hope of receiving the surgical care that he needed to treat the contractures.

It took a multidisciplinary team, spread across the country, to provide these types of services to him. In the field, SMAH partnered with three volunteers who travel village to village to identify potential cases for the surgical camp. Volunteers found Ram and offered the surgical services to him.  At first, he wasn’t certain he wanted to seek care as the prior times had been so disappointing.

He finally decided to put his trust in the volunteer and made the 24-hour bus trip from the far west of Nepal to Banepa. At the hospital he was greeted by the friendly smiles of the international team.  After the screening, everything moved very quickly.

Dr. Chopra recalls meeting Ram two years ago, “I remember him coming into the screening room, his hand was severely infected. We realize that if we did not perform an immediate amputation, he would die from sepsis. So even though Ram needed significant reconstructive surgery on his face and neck, we had to amputate his hand first. The goal was to save his life now and to focus on reconstruction later.”

Now, two years later, Dr. Chopra and Ram met once again.  “This year,” explained Dr. Chopra, “the priority was to improve oral function. The contractures of his lip were so severe that the opening and closing of his mouth was severely limited. Essentially, he didn’t have adequate oral function. It was incredibly rewarding to see Ram again. In preparation for the surgical camp, the volunteer had sent us photos of the patients. This was incredibly helpful. We preplanned the procedures and surgical team. I knew exactly where I was going to take the tissue transplant from and how I was going to release the contractures and fix his lip. This year as an integrated Nepali-Australian surgical team, we were able to work closely to care for Ram and 35 other patients. We worked side-by-side. I learned from them, they learned from me. It was great! It was such a privilege to see Ram again and to transform his scar into a smile.”

“I am very happy”, explained Ram. “I would like to thank the Australian team and Scheer Memorial Adventist Hospital for making a difference in my life. I am so happy and grateful! I’m looking forward to returning next year to receive the next set of surgeries to restore my smile.”